You are here: Home / Learn / Cycle of Violence 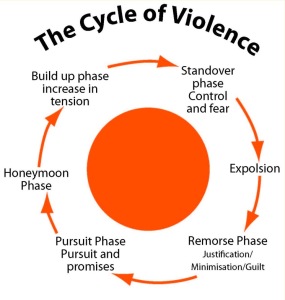 A cycle of abuse generally follows the following pattern:[1]

A cyclical nature of domestic violence is most prevalent in intimate terrorism (IT), which involve a pattern of ongoing control using emotional, physical and other forms of domestic violence and is what generally leads victims, who are most often women, to women’s shelters. It is what was traditionally the definition of domestic violence and is generally illustrated with the “Power and Control Wheel”[3] to illustrate the different and inter-related forms of abuse. Intimate terrorism is different from situational couple violence, which are isolated incidents of varying degrees of intensity.[4]

A general, intricate and complicated cycle of traumatic violence and healing map was developed by Olga Botcharova when she worked at the Center for International Studies.[5]